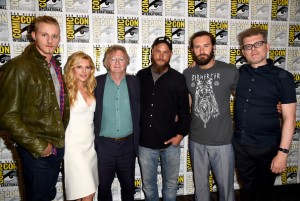 San Diego Comic Con 2014 is wrapping up but not without a few treats from Vikings. While HISTORY Channel is keeping a lot of Season 3 a secret they did confirm, along with Michael Hirst that the Vikings will indeed raid Paris. Hirst said “we’ll have 100 ships and 3000 men attacking a “citadel”, Hirst revealed. This is the “dawn” of what became known as the Viking age.”

Clive Standen (Rollo) revealed that during filming of the third season “they lost a cast member.” Which cast member wasn’t revealed.

I have no truth, only stones and bones”, says the Shaman. “I see life splitting, joining, and struggling, each for itself. Alone…
~Seer