5 Reasons You Should Watch Marco Polo 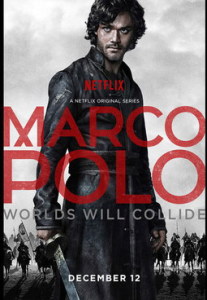 Marco Polo is a Netflix Original series released on 12 Dec 2014. It’s a 10 episode series exploring the life and times of trader and adventurer Marco Polo’s time in the court of Kublai Khan. Historical dramas based in ancient and medieval times are becoming more popular these days. Shows like Rome, Spartacus, Camelot, Pillars of the Earth, Vikings, the list goes on and on.

But like anything nowadays in the historical fiction/fantasy genre it draws comparisons to the highly popular, Game of Thrones. While one is pure fantasy the other uses historical events as it’s guide. You won’t find White Walkers, wargs or greensight in Marco Polo. You will find stunning landscapes, epic battles and political intrigue. If it helps to relate it to Game of Thrones, think of it as a series based entirely on the Dothraki.

Here are 5 reasons you should watch Marco Polo

Currently there is only one way to watch Marco Polo and that is on Netflix. Unlike the other original series Netflix produces, Marco Polo looks like it may be only one season.