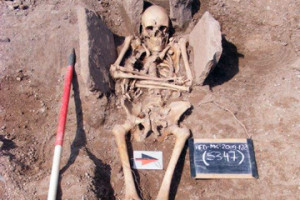 The battered remains of a medieval man uncovered at a famous cathedral hint that he may have been a Norman knight with a proclivity for jousting.

The man may have participated in a form of jousting called tourney, in which men rode atop their horses and attacked one another, in large groups, with blunted weapons.

Archaeologists uncovered the man’s skeleton, along with about 2,500 others — including a person who had leprosy and a woman with a severed hand — buried at Hereford Cathedral in the United Kingdom. The cathedral was built in the 12th century and served as a place of worship and a burial ground in the following centuries, said Andy Boucher, a regional manager at Headland Archaeology, a commercial archaeology company that works with construction companies in the United Kingdom.

From 2009 to 2011, his team respectfully removed the human remains. But one stood out — a 5-foot-8-inch (1.7 meters) man with serious trauma on his right shoulder blade, 10 of his right ribs and left leg.

“He’s the most battered corpse on the site,” Boucher said. “He had the largest number of broken bones.”

The man was about 45 years or older when he died, according to a bone analysis. He was buried in a stone-lined grave, a type of grave that was used between the 12th and 14th centuries, the researchers said.

Four of the man’s ribs showed healed fractures that may have occurred simultaneously, suggesting a single instance of trauma, researchers wrote in the pathology report. Another four ribs were in the process of healing, indicating that the man was still recovering from the injuries when he died. The other two damaged ribs also show evidence of trauma, and his left lower leg has an unusual twisting break, one that could have been caused by a direct blow or a rolled ankle, according to the report.