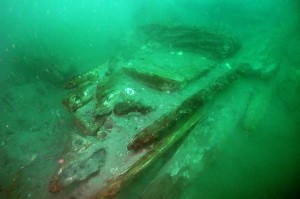 It was the largest armada the world had ever seen, and would only be surpassed 700 years later when the Allies invaded Europe during the Normandy landings. The Mongol leader Kublai Khan sent two massive fleets during the 13th Century – of up to 4,000 ships each – to try to invade Japan. Both attempts were thwarted and destroyed by severe weather, with the ships and the men they carried laid to rest off the coast of Japan.

Now, researchers think that they’ve discovered the wreck of one of the ships, the second to be discovered in four years, and have potentially found three more. All finds date to the two attempted invasions by the Mongols launched in 1274 and 1281, both of which were destroyed by typhoons that the Japanese called “kamikazes,” or divine winds, that saved the country from the foreign army.

[Kublai Khan’s] ideas of world domination didn’t, however, stop with the mainland. Mobilizing over 140,000 troops, he launched two armadas to capture Japan, both of which ended in disaster. The researchers think that they’ve managed to find wrecks from both of these failed attempts. The first, found in 2011, is resting 200 meters off the coast of Takashima Island, but the latest discovery has been found in a bay close to the city of Matsuura on Kyushu island. It’s thought that the fleet must have anchored in the bay to shelter from the raging typhoon before it sank.

Read the full story at IFLScience!

Photo credit: University of the Ryukyus and the Matsuura City Board of Education