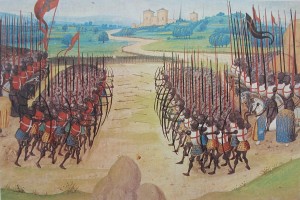 This year marks the 600th anniversary of one of the biggest battles in Medieval history, the Battle of Agincourt. We discussed the battle in lesson 44 of the podcast. Agincourt was a turning point in the Hundred Years’ War for Henry V and England. It’s an epic battle where legends are born and chivalry died!

FutureLearn, the massive online learning platform, which partners with over 25 UK Universities is offering a course on Agincourt through the University of Southhampton. It’s free to sign up with FutureLearn and the Agincourt course is free as well! The course starts on 19 Oct 2015.

The Battle of Agincourt, in 1415, is one of the most famous battles in the history of warfare, and one of the most important and memorable English victories. It still captures the imagination today, but why are stories still told about Agincourt? And do these stories represent what really happened on the battlefield?

This free online course will explore the myths and realities about the battle, marking its 600th anniversary on 25 October 2015. The two weeks will be led by the foremost academic expert on the battle, Professor Anne Curry.

Sign up for the Agincourt 1415: Myth and Reality course now!