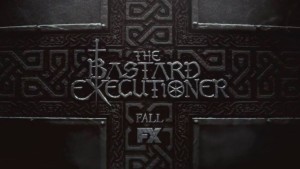 The Bastard Executioner, a new series from Kurt Sutter the creator of The Shield and Sons of Anarchy, tells the tale of a 14th Century warrior turned executioner. Kurt Sutter and Emmy winner Brian Grazer (Apollo 13, Robin Hood, Cowboys and Aliens) will serve as Executive producers.

Season 1 of The Bastard Executioner premieres on 15 September 2015 on the FX Network and will run for 10 episodes. (DirecTV channel 248, DISH channel 136, check your local listings for cable channels).

The Bastard Executioner tells the story of Wilkin Brattle, a 14th century warrior, whose life is forever changed when a divine messenger beseeches him to lay down his sword and lead the life of another man: a journeyman executioner. Set in northern Wales during a time rife with rebellion and political upheaval, Wilkin must walk a tight rope between protecting his true identity while also serving a mysterious destiny. Guided by Annora, a mystical healer whose seeming omniscience keeps Wilkin under her sway; manipulated by Milus Corbett, a devious Chamberlain with grand political aspirations; and driven by a deepening connection with the Baroness Lady Love, Wilkin struggles to navigate political, emotional and supernal pitfalls in his quest to understand his greater purpose.