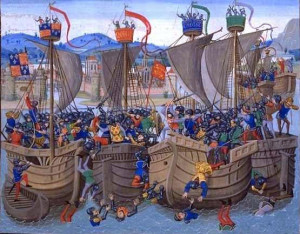 Historians and archaeologists have tentatively identified the location of one of medieval England’s greatest ships.

Detailed archival and aerial photographic research carried out by British maritime historian, Ian Friel, has pinpointed a 30 metre stretch of the River Hamble near Southampton as the final resting place of one of Henry V’s largest warships – the Holigost (in modern English, the Holy Ghost).

The vessel is entombed in deep mud under the bed of the river.

The government’s historic environment agency, Historic England, is now planning to carry out a detailed survey of the ship. They intend to use sonar-based sub-bottom profiling equipment to ‘x-ray’ through the deep mud to create a computerized image of the vessel.

The Holy Ghost was the third biggest ship in Henry’s navy. It was capable of carrying around 750 tonnes of weapons, equipment, men and cargo, had up to 200 crew and spent much of its time at sea

The vessel was also the earliest English ship known to have had repairs carried out by a diver – a Welshman called Davy Owen. Additionally, the ship is interesting for the number of significant named individuals associated with it – including the vessel’s builder (the early 15th century Southampton merchant and MP, William Soper); the vessel’s master (captain), Jordan Brownyng; and one of Henry’s top military commanders, Sir Thomas Carew.

The Holy Ghost was also important for the way it would have symbolized Henry’s personal political and religious beliefs. Historical research over recent years has revealed that the ship bore one of his personal royal mottos – ‘Une sanz pluis’ (borrowed from a French version of the Iliad) – meaning literally ‘one and no more’, expressing the king’s ultra-autocratic political belief that he alone, by divine right, was absolute master of England.