Delving into the Welsh Dark Ages 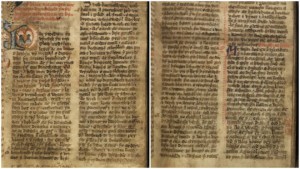 Manuscripts chronicling the history of Wales and Britain from Roman rule onwards are a new focus for experts.

The Welsh Chronicles are a collection of texts that both attempt to mark historical events – and according to some – act as propaganda.

It has been suggested that some of the texts even urge the Welsh to rise up against their Saxon oppressors.

Historians have gathered at St John’s College, Cambridge, for a two-day conference examining the collections.

The manuscripts are scattered across Wales and England, with some held at the National Library of Wales, others at the British Library, and some of them at places like Exeter Cathedral.

They bear imposing names like ‘Epitome Historiae Britanniae’ and ‘Brut y Tywysogion’ – chronicling events from the death of the last king of Britain, Cadwaladr, in AD682, through to the 14th Century medieval Wales.

“Standard histories of early Wales are based heavily on the chronicles, but we as scholars could do so much more to question the circumstances in which they were written, or what they really tell us as a result,” argued Anglo-Saxon PhD student Rebecca Thomas.