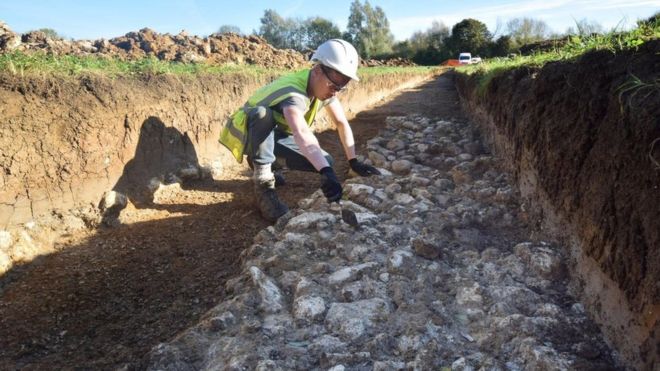 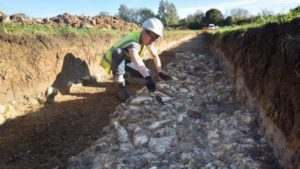 A medieval stone causeway has been discovered underneath a field in Oxford during excavations ahead of a flood alleviation scheme.

The Environment Agency’s £120m project aims to reduce the risk of flooding to homes and businesses in the city.

It also found evidence of Bronze and Iron Age settlements and stone flints from hunter-gatherers.

The causeway, uncovered in a field near Willow Walk, is made of rounded river pebbles, limestone and chalk rocks.

Some of the stones appear to be marked with ruts made by cartwheels.

Horseshoes were found among the cobbles and will be analysed by X-ray to determine their age.

Ben Ford, project manager for Oxford Archaeology, said: “We have uncovered evidence for use of the landscape spanning three very different time periods.

“From the Mesolithic, when we roamed the land in search of our food and made tools from stone; from the Bronze and Iron Ages, when we had established settlements and were competent crop and animal farmers; and from medieval times, when the emphasis was on trade and commerce.

“This gives us an unprecedented insight into the history of this part of the Oxford floodplain.”