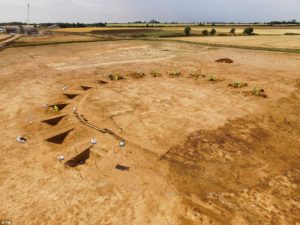 An abandoned medieval village has been uncovered by workers upgrading a stretch of road near Cambridge.

The remains of 12 buildings cover an area of six hectares, and the entire layout of the settlement is discernible despite the fact it was deserted more than 1,800 years ago.

Earlier remains of up to 40 Anglo Saxon timber buildings are also identifiable, with alleys winding between houses, workshops and agricultural structures.

The village is thought to have been occupied from the eighth to the 12th centuries, according to a team of almost 250 archaeologists working on the site.

Experts led by the Museum of London Archaeology Headland Infrastructure have dug more than 40 excavation sites along a stretch of the A14 between Cambridge and Huntingdon, and expect to complete work by summer.

Artefacts uncovered during the project include a rare Anglo Saxon bone flute from the fifth to ninth century, an ornate Roman jet pendant depicting the head of Medusa, and a Middle Iron Age timber ladder.