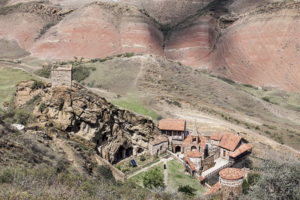 The David Gareji Monasteries and Hermitage, one of Georgia’s most cherished cultural heritage sites, has been included on a list of Europe’s seven most endangered monuments of this year, facilitating upcoming international efforts for its preservation.

The rock complex, dating back to the 6th century, has been named among “gems of Europe’s cultural heritage” by Europa Nostra, a major continent-wide heritage organisation.

Unveiled on Thursday, the list includes such European sites as several Post-Byzantine Churches in south-eastern Albania and the Buzludzha Monument that served as the Soviet-era headquarters of the Communist Party of Bulgaria.