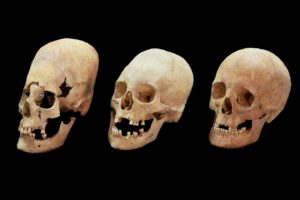 The discovery of nine Early Medieval women in Bavaria with artificially elongated skulls, diverse genetic origins and different dietary habits than local people indicates they came from afar, one possibly from Asia, researchers reported Monday in the Proceedings of the National Academy of Science.

Prof. Joachim Burger and colleagues even speculate at a reason: import of foreign brides for the sake of strategic alliances.

Information on later periods has been scanty, not least because the environmental conditions in Southern and Central Europe are tough on organic remains.

“Happily, much of Bavaria (although not all) is covered with loess and we find that in this soil type, the skeletons are preserved very well, and so does their DNA,” osteologist Michaela Harbeck tells Haaretz.

Evidence from dozens of remains from the fifth and sixth centuries suggests different movement patterns for men and women, the archaeologists say. In Europe, most of the skulls with artificial cranial distortion date to the fifth century, Harbeck says. “There are only a few cases dating to the second and third century, mainly in Romania and Hungary,” she adds.

The unusual remains of the nine women with cranial deformation were found in southern Germany, not far from Munich – at a late Roman-period cemetery in Klettham, and early medieval cemeteries in Altenerding and Straubing-Bajuwarenstrass.