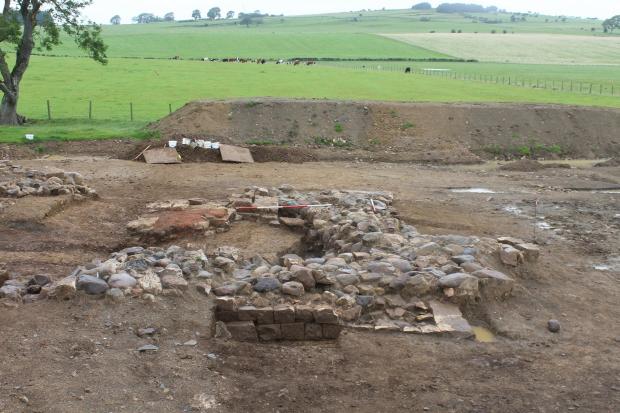 Archaeologists investigating medieval ruins along the route of the new 100km pipeline near Cockermouth found an ancient skeleton and new clues to the area’s Roman past.

The discoveries were made in a field south of Bridekirk ahead of building work taking place and have just been revealed by United Utilities.

They came out of the blue for the archaeologists.

Buried under some backfill at the corner of the medieval building we found the remains of a skeleton laid out.

They were only expecting to find the remains of a medieval grange, or farm, discovered during earlier works on the site.

But as their painstakingly dug out the foundations, they found a perfectly-preserved skeleton laid carefully among the rubble in the floor, along with the footprint of another unknown structure.

They also found coins, pottery sherds, evidence of an oven or kiln, and pieces of specialised Roman heating tiles, which were used in the construction of under-floor heating systems in prestigious Roman buildings, known as hypocausts.

Phil Mann of CFA Archaeology said: “Literally as we took the grass off we exposed the foundations of the medieval building, but what we didn’t expect to find underneath were the foundations for a very unusual large Roman structure containing the remains of a kiln or oven with evidence of burning still present.

Read the full story on News&Star