15th century Medieval Highland sword sells for £30,000 at auction after being discovered in a garage

10 February 2020 Archivist Archaeology Comments Off on 15th century Medieval Highland sword sells for £30,000 at auction after being discovered in a garage 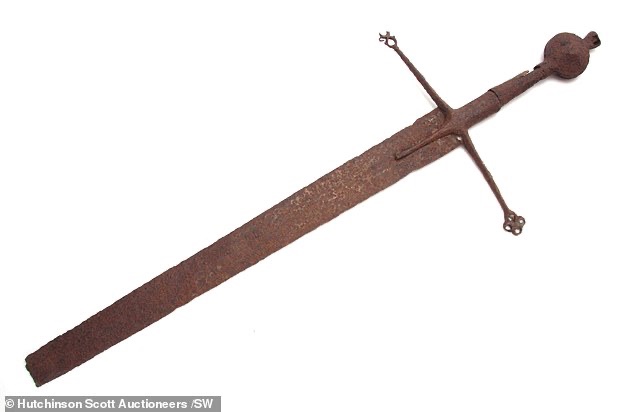 A rusty 600-year-old sword used by Highlander mercenaries has sold for a whopping £30,000.

The medieval weapon, believed to date from the 15th or 16th Century, originated in the Scottish Highlands.

Only a few swords from the era survive, with most displayed in ancestral homes or museums.

The sword was valued at £200 before being sold for 150 times that amount to a Canadian buyer by Hutchinson Scott auction house in Skipton, Yorkshire.

Hutchinson Scott said the dimpled surface of the sword meant it was likely to have been buried, submerged or exposed to the elements for many years.

Hutchinson Scott also confirmed that the sword’s tip is missing.

The anonymous finder of the weapon was clearing out his recently deceased father’s garage in an undisclosed location.

The sword is now in London and is due to be shipped to Canada shortly.

Paul Macdonald, a master-at-arms at Edinburgh-based sword makers Macdonald Armouries, had hoped to bid on the artefact and get a bargain.

Macdonald said he had seen three or four other swords of this type, held in the National Museum of Ireland in Dublin.

He believes the sword was used by West Highlander members of the ‘gallowglass’ – the elite mercenary warriors from Scotland who were employed to defend Irish clans from the 13th to 16th centuries.

The gallowglass warriors were hired for their fighting prowess and were seen as effective bodyguards who were unlikely to become involved in local disputes.

This type of sword was also the weapon of choice for battles in the highlands of Scotland between the English.